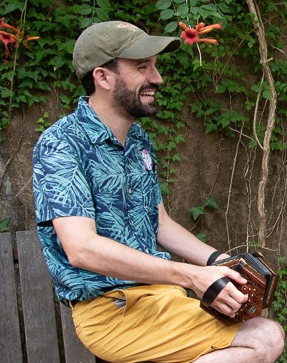 Benedict Gagliardi is a Providence-based singer and multi-instrumentalist. He most often wields an Anglo concertina and tenor guitar to play dance tunes and accompany songs in his own eclectic New England style. Benedict is an avid researcher of old songs (especially about Rhode Island and insects) and enjoys the thrill of revitalizing obscure material from field recordings and old books. As a song-centric duo, The Vox Hunters, he performs around New England with his partner Armand Aromin, and the pair put significant energy into advocating oral tradition and social singing via pub sings and community music-making in and around Providence. By day, Benedict is an entomologist and works full time as the staff biologist at the Nature Lab at the Rhode Island School of Design.