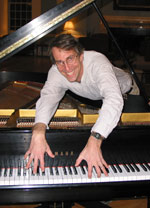 Dave Wiesler began his musical journey as “the guy who could figure out the chords” in his high school garage band. Nearly 20 years later he discovered playing folk music for dances, and felt that the job description had been written just for him. At home in a wide range of styles, Dave is in demand for contra, English and Scottish country dancing, swing, waltz and vintage dance; and his music has taken him across the country and into Canada, Scotland, England, France and the Galapagos Islands. Dave is a prolific composer of tunes and songs, and is also a capable guitarist and singer. He lives in Newark, DE, with his wife and two young sons who don’t let him practice nearly as much as he’d like.