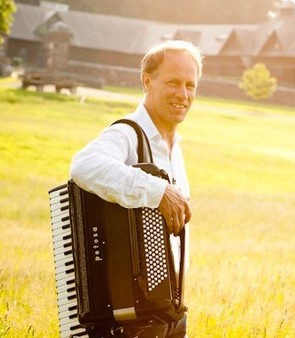 Accordionist/pianist Jeremiah McLane has a diverse musical background including blues, jazz, Celtic, Québécois, French, Scandinavian and other roots influenced music. He has served on the faculties of the State University of New York in Plattsburgh, NY, the Summit School for Traditional Music in Montpelier, VT, and currently teaches at the Upper Valley Music Center in Lebanon, NH. He teaches regularly at summer music programs throughout the United States including Ashokan, Centrum’s American Festival of Fiddle Tunes, Swananoah, Maine Fiddle Camp, Lark in the Morning, John C. Campbell Folk School, Pinewoods, Bay Area CDSS Camps, and many others. He is the founder and director of the Floating Bridge Music School, and since 1990 he has released over thirty-five recordings. In 2016, Montpelier Times-Argus music critic Art Edelstein named Jeremiah Vermont’s musician of the year, citing his contributions in teaching, recording and performing is his various configurations. Jeremiah tours regularly with Kalos and Triton as well as performing with his wife Annemieke McLane, in Cassotto Duo.