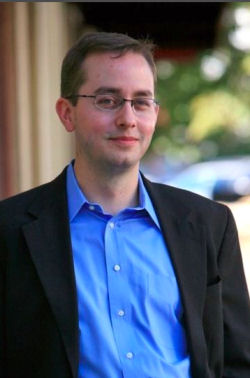 Michael Barrett is a Boston-based conductor, singer, multi-instrumentalist, and teacher. He has performed with many professional early-music ensembles, including Blue Heron, the Boston Camerata, the Huelgas Ensemble, Vox Luminis, the Handel and Haydn Society, Boston Baroque, Nederlandse Bachvereniging (Netherlands Bach Society), L’Académie, Seven Times Salt, Schola Cantorum of Boston, and Exsultemus. He can be heard on the harmonia mundi, Blue Heron, and Coro record labels. Michael has served as music director of Convivium Musicum since 2007. He also directs the Meridian Singers, a vocal ensemble based at MIT, and has served as guest director of Cantilena, a women’s chorus in Arlington, and as a visiting lecturer in choral conducting at Bridgewater State University. Michael is currently an Assistant Professor at the Berklee College of Music, where he teaches conducting courses for undergraduates. He is also Lecturer in Music at Boston University, where he teaches seminars in Renaissance and Baroque choral repertoire for graduate choral conducting students. With his wife Anney he is co-owner of The Green Room, a multipurpose arts studio in Union Square, Somerville, where he maintains a private studio for lessons in voice and music theory. Michael earned an AB in music from Harvard University, an MM in choir conducting from Indiana University Jacobs School of Music, and a First Phase Diploma in Baroque and Classical singing from the Koninklijk Conservatorium (Royal Conservatory) in The Hague, The Netherlands. In 2015 he completed his DMA in choral conducting at Boston University.