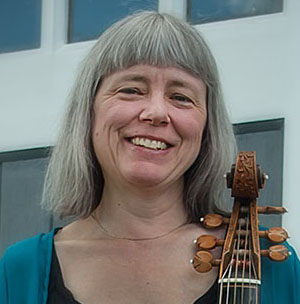 Carol Lewis plays and teaches all sizes of viola da gamba, from the tiny pardessus to the seven-string bass viol. A native New Englander, she studied at Wellesley College and the New England Conservatory of Music, before spending several years studying and performing in Europe. She has performed and recorded with prominent musical ensembles, including Hespèrion XX, the Boston Camerata, and Capriccio Stravagante, and has traveled throughout North America, Europe, and the Far East. Back home again in the Boston area, Ms. Lewis has taught at New England Conservatory and maintains a private studio in Somerville, Massachusetts. She loves coaching viol consorts and mixed ensembles and has done so for many years. She is a founding member of Ensemble Chaconne and Duo Maresienne, as well as the El Dorado Ensemble.