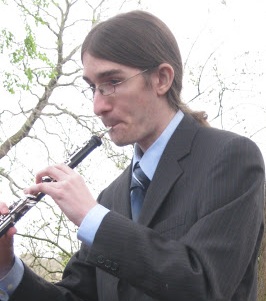 Jonathan Werk has played oboe with the Kanata Symphony Orchestra since 2007, when he joined as a way to continue playing music while studying engineering at university. Jonathan received his Bachelor of Aerospace Engineering in June 2011 from Carleton University, and in September 2012, he started a Bachelor of Music at the University of Ottawa, studying oboe with Charles Hamann. At the University of Ottawa, Jonathan has performed with the university’s wind ensemble, orchestra, choir, and played in the pit orchestra for the university’s opera production. Outside of his studies, Jonathan has played in many Ottawa musical ensembles, including the Ottawa Wind Ensemble, Ottawa Chamber Orchestra, Carleton University Chamber Music Ensemble, Carleton University Baroque Opera Ensemble, Sinfonia Ottawa, and the Ottawa Youth Orchestra. In addition to playing classical music, Jonathan’s love for music extends into many genres of folk and world music, and has led to him playing oboe, penny whistle, bombarde, and didgeridoo in the contra dance band “Stolen Goods.”